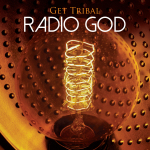 Following the success of the award-nominated album God of Drum, Get Tribal (Kari Hohne) delivers another collection of rhythmic soundscapes centered on Shamanic drumming in her new release Radio God. While there are many new age recordings and world music albums, this new project by Get Tribal combines both the earthy percussive and world instrumental elements with the ambience and healing intent of new age music. Radio God is an alchemical blend of diverse rhythms and uplifting grooves, exploring a fusion of sound that is sensual, soul invigorating, and sure to get you moving.

In my recent interview with Kari, she spoke of her unique focus on drumming and the role it plays in her music: “I honor the drum as a healing tool and as a tonal instrument with lots of personality. The beating of mother’s heart and then our own is the first sound we hear and I believe the drum can calm and relax us. Where people generally think of meditation music as 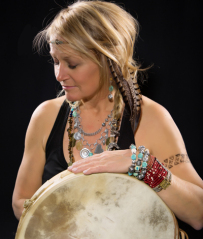 a soft spa style composition, my bold use of the drum can seem non-relaxing, but drumming settles us down. In Radio God I mixed modern beats with ancient tribal beats so the mix is always crossing boundaries. As yoga and exercise music, I wanted to root the body in a constant rhythm while composing uplifting and spiritual melodies that elevate spirit. Drums are so central to all of my compositions that I often feel like the wild child of the New Age music genre.”

When I asked about what led her to play music in this particular style, she replied: “My work with Shamans and all of the writing I do on dream interpretation and mythical archetypes. I believe we have two types of awareness: one that is active by day, organizing itself around maintaining the status quo or avoiding fear. The other at work in our dream life which is more energetic, omniscient and seems to know more about who we are and where we should be than we do. I create music that connects with this energetic awareness, using drums much like Shamans do to achieve transcendental states. I didn’t choose this genre – it chose me.”

We talked about the intriguing title of the album and the concept behind the project. In her words: “Radio God embodies an otherworldly DJ Creator, spinning timeless music from space. It was inspired by the idea that if all sound waves went out into the cosmos, they would blend together in universal harmony and return with a timeless message of unity: Om. But my 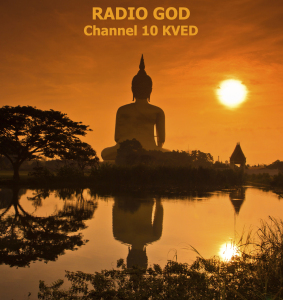 music has the type of rhythms that make you want to dance. Each track is named with four radio call letters inspired by regional or religious iconography. The secondary track names reveal the process of transcendence one achieves through enlightenment. The meditative rhythms root the body while the melodies are infused with inspiration from prayer, chants and world spiritual songs. Radio God is also a project centered on removing any boundaries in spiritual differences and even the awareness of time and space.”

So let’s tune in and see what’s broadcasting on Get Tribal’s airwaves. Interestingly, after all this talk of drumming, the first track, or “radio station,” entitled “GUIP: Sunrise,” doesn’t start with drums… but with a piano and strings intro leading into a Middle Eastern-sounding stringed instrument. Here, Kari describes the thought behind the radio call letters for this song: “GUIP was just short for “Gypsy” which influences that track.” As the song evolves past the one-minute mark, the drums definitely do kick in with a contemporary rhythmic groove and some cool retro synthesizer lead lines. An interesting feature of next track, “RUAH: Breathe,” which is inspired by the ancient Hebrew prayer “Shema Yisrael,” is the dramatic orchestration of legato strings, piano and orchestral percussion, which Kari describes as being reminiscent of 1950’s MGM Bible movie soundtracks.

A very different feel is embodied in “BEJA: Elegant Flow,” which is an unlikely fusion of styles, namely Baroque Canon and late 70’s synth-rock. It’s an unusual blend, but it works, and is certainly in keeping with the above-mentioned goal of transcending boundaries. On track 4, “TABA: Out of the Underworld,” which was inspired by the Epic of Gilgamesh, some of the most dynamic drumming heard on the album thus far is featured. According to Kari, this piece celebrates the music of ancient Mesopotamia, with elements of 1960’s spy cinema soundtracks.

We travel from the underworld to the outer world, on the next track: “RADIO GOD: Into the Outerworld.” This is one of my favorites with its modern electronica vibe and trippy sound samples. Kari describes it in this way: “This composition embodies the call and response to the Source mixing industrial, orchestral, and ethnic elements that bridge the past and future…” And speaking of past and future, a track called “ANKH: Dancing Desert,” could have been called “Disco Dervish,” for its blend of Middle Eastern whirling dervish and 80’s disco elements. 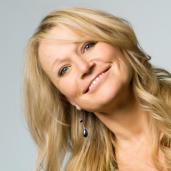 As we have seen, the music on this recording is all about audio alchemy; the blending of diverse and often unlikely ingredients to produce something that sounds like nothing you’ve heard before. I think what impresses me the most about the motivation of Get Tribal is it’s inclusiveness and the idea of crossing boundaries as described above. I have great respect for Kari’s intentions in mixing spiritual and cultural traditions from different time periods to create music for uplifting the spirit. As a relatively new recording artist, Kari Hohne, in her musical persona of Get Tribal is finding a unique voice, and exploring new ways to express it. I sense a lot of potential here, and have a feeling that future recordings will show even more of that. So I’ll definitely keep my radio tuned in to Get Tribal’s frequency.