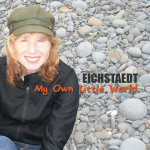 My Own Little World is the debut solo album from guitarist Petra Eichstaedt of Munich, Germany. Since all of the songs are instrumental, nothing is lost in the translation and her six strings speak a universal language. It wasn’t always that way though, when she performed and recorded albums in 2002 and 2010 as part of a duo called “Clare,” that created melodic songs with poetic lyrics. Petra’s musical background goes back even further, however, to the age of 14 where she studied classical guitar at the local music school in northern Germany. Her artistic leanings also extend beyond music to painting, photography, and graphics, including a degree in graphic design. For Petra, all these art forms blend in the cauldron of her creative process. In her words: “I always have different pictures and scenery in my head which eventually blends with the music I create.” Other things that influence her songwriting are books and films, particularly ones like “The Wizard of Oz,” “Fantasia,” and “Lord Of The Rings.” Also quite prominent in Petra’s music are reflections of the many places she has visited in her own travels. A number of the tracks heard on this recording are her impressions evolved into songs.

Petra describes the album as “a musical trip into my dreams,” and the journey starts with the title track, or at least Part 1 of it. Nature sounds 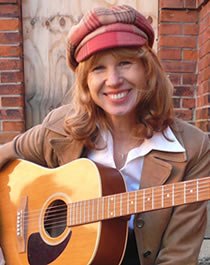 accent gentle finger-style guitar colored with reverb and effects to create an almost harp-like quality. A subtle synthesizer string pad in the background fills in the pastoral picture. Her characterization of the song as being “like a dance of elves” provides a good idea of the vibe of this piece. A music video for this tune accompanied by Petra’s nature and travel photography, as well as her other videos can be seen on her website. I liked the way on this song and a number of others that she used effects like chorus and echo on her guitar to add atmosphere and dimension. The next song, “Clandestino,” continues the musical mood that has been set. In an interview she shared a bit about this song and her compositional style in general: “The process for each piece is different. “I always begin with playing guitar. Sometimes, for example with ‘Clandestino,’ I can already hear the violins when I’m just playing guitar. So I have the arrangement in my head when I compose the songs.” Petra writes, arranges, and produces all her music.

A different facet of Petra’s musical spectrum is reflected in a tune called “Gypsy,” which features fast rhythmic strumming in a style alluded to by the song’s title, laying down a driving groove for an ethnic-sounding synth to solo over. A real highlight for me on the album is an emotionally evocative composition entitled “Theme From A Secret Place,” with its simple yet heartfelt melody and soundtrack-like quality as played on acoustic guitar and keyboard. On a track called “My First Song, a lilting flute sound drifts over the folk guitar background, evoking an image of a butterfly fluttering over a field of flowers. And just when we thought we had Petra’s style figured out she introduces new elements in a tune called “Crazy,” that kicks off with a contemporary electronic beat and multi-tracked guitars that almost sound like a laid-back U2. It’s a different feel from the song that precedes it, but I like them both. I also enjoyed the percussive energy of the conga drums that energize a breezy optimistic tune called “Nice And Easy.” One of the aforementioned songs influenced by a place Petra traveled to is “Achill Island,” which is off the Irish coast. Not surprisingly, the piece has a bit of Celtic influence. As Petra describes: “Ireland 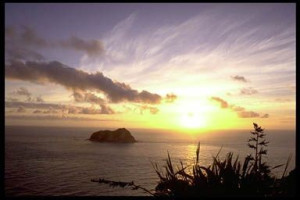 has such a mystic past with castles and fortresses everywhere.  And I love the ocean, wild cliffs and beaches. That is why in some of my music I use the accordion which I associate with the seaside.” Another location-inspired song is the last track, “Sunrise,” written about the East Cape in New Zealand. According to Petra: “The people from New Zealand say that this is the place where the rays of light touch the earth first. I was there and could see the most beautiful sunrise of my life. A New day, a new beginning… new hopes.”

The songs have a slice-of-life quality to them and present little vignettes and glimpses of various realities. My Own Little World has an earthy unpretentious quality that doesn’t seek to dazzle with extravagant production but tells its stories with simplicity and heart. The debut album by Petra Eichstaedt shows potential for this evolving artist. As the saying goes, “The journey of a thousand miles begins with at single step,” and Petra’s first venture as a solo recording artist shows that she is on firm footing and following a promising creative path. I’ll look forward to her continuing adventures.